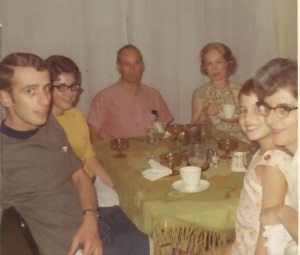 Oooh, bad family photo of us all from about 1968, with my Dad and his sister Francine in center.
You may have noticed my posts are distinctly lacking in the “God is in the flowers and rainbows” flavor. In fact, more of my posts are about trials I face or disappointments in myself. This no doubt comes from the fact that, while I am every bit female, I‘ve never been a “girly” girl. I look like death warmed over in pink, I simply look silly in ruffles, and though I love jewelry, the beautiful blingy cocktail rings my sweet friend Patty has given me are a glaring contradiction on my thin, veiny hands. And frankly, my life has been so challenge-filled since 1995 that I find little comfort in stress-busting devotionals that advise me to take a bubble bath or have my nails done. God IS in the flowers and rainbows, and probably in bubbles, too, but I need a God who is there to be found IN my pain, loss, anxiety, disappointments, grief, and frustrations. If He isn’t to be encountered and experienced there, then what hope do any of us have?

After I take the bubble bath and have my nails done, what has changed? Have those admittedly fun exercises changed my circumstances? If they haven’t changed my situation, have they changed me? No. And while I love bubble baths, I need something more substantial in my life. The most effective stress-buster to me is seeing God’s hand moving to transform me in the middle of the messes my life seems to step into again and again like the ubiquitous gum on a summer day in a Wal-Mart parking lot.

I long to dance in the rain – not because I’m a pessimist, but because I know rain will come. I need a God who isn’t afraid to get wet, who can transcend, transfigure, translate and transform, as the lyrics in John Mark McMillan’s moving, anointed song, “How He Loves”

http://www.youtube.com/watch?v=Chx6s3qXKt4&feature=related powerfully declare: “When all of a sudden, I am unaware of these afflictions eclipsed by glory, and I realize just how beautiful You are and how great your affections are for me.” I need a God of grit and guts and glory. That’s who I’m encountering in this deepest trial of my life – a God of incredible, deep compassion and love – and that’s who I pray you find within these thoughts and discoveries of mine.

This post is about my father, but Bill and Susan Miller, this one is for you. I love you!

“Uuuuhhhh . . . uuuhh . . . .” Dad’s mouth opened as he tried to speak. His eyes still held that “deer in the headlights” look of incomprehension so typical of Alzheimer’s patients, but I caught a spark of – what – hope? Thanks? Love? Mom, Bonnie and I were gathered around him holding his hand, once so strong and steady as he guided wood through the saw blade, but now so forceless and weak, and touching his now thin shoulders. We’d come to say good-bye.

Dad had developed pneumonia and seemed to recover from that, but now he had stopped eating. This Monday morning, the day before Dad’s 75th birthday, a nurse in the Alzheimer’s unit of the nursing home had called my Mom to tell her to come quickly, as this might be Dad’s last day. I’d thrown the car into gear and flown to Mom’s house to pick her up and quickly dash up to the home. “Oh, Rosie!” was all she could get out through her sobbing. The past five years of grieving as we watched Dad steadily decline still hadn’t prepared our hearts for this day.

Surprisingly, when Mom and I arrived, Dad actually looked pretty good. He was sitting up in a chair looking apparently healthy and pretty much like he usually did. Mom and I chatted to him while the nurses worked around us. “To him” was all we could do, because Dad hadn’t been able to speak for the past two years; in fact, he hadn’t even uttered so much as a syllable on the many Sundays when my husband, our ten-year-old son and I stopped in to see him after church. Ethan had never really known Grandpa when he was well, this man who made wagons and pedal fire trucks and doll houses and so many treasures for his grandchildren before dementia robbed him of his considerable talents.

But he was still Grandpa, still my Dad, and I thought back to treasured evenings in our back yard sitting on his telescope mount as he twirled me around the stars, or standing beside him in the garage redolent with the fragrance of newly sawn pine as he showed me how to drive a nail and drill a hole in a scrap of lumber. He was still the man I loved and respected, somewhere inside there. I dared to believe that, fought to hope it was true. Mom and I stepped aside to let the nurse take Dad’s vitals. The door opened and my sister Bonnie walked into the room. The nurse gave a slight gasp as my Dad’s vital signs shot up. Bonnie hadn’t seen Dad in two years, not since he moved from his home into this skilled nursing facility. She did live quite a distance away, but it was just too painful for her to see Dad in his continually deteriorating condition. I understood completely. Bonnie had always been there for Dad and Mom over the years, and she still helped Mom every way she could.

Dad hadn’t seen her in two years, yet something in him rose up in recognition of a face he loved, and rose up so powerfully that his heart rate and respiration increased immediately!

“Should we pray with him? Should we tell him . . .?” I honestly don’t remember now which one of us voiced what we all were thinking: should we give Dad permission to go home to Jesus? Should we give him our blessing and love? Wordlessly we all agreed, gathered around Dad, and began to pray. “Thank you so much, Father, for our father, for his love, for the faith he shared so freely . . . . “

Then we said it, every eye awash in tears that flowed to the nurses in the room, too. “Dad, if you’re ready to go, we give you our blessing to go home to Heaven.” That’s when it happened: Dad tried to speak! He looked directly into our faces and said, “Uuuhhh . . . uuuhhhhhh.” Those might have been babbled syllables to anyone else, but to the tree of us, they were the voice of a beloved husband and father, struck dumb by a disease advancing brain cell by brain cell for five years, but the man still alive and vital inside, somewhere, somehow!

One by one we bent down and kissed him, hugged him, squeezed his feeble hand, and left, fairly confident that his healthy appearance meant this might be a false alarm. Two days later he died, sweetly and quietly and I believe liberated to leave the prison of his disease and go meet his fellow carpenter.

Some people might understandable dismiss this as coincidence to which we attributed too much significance. I might, too, had it not been for a comment from one of the nurses after Dad died, and the same scene repeated exactly four weeks later over the bed of Dad’s sister, my Aunt Cine. Francine developed Alzheimer’s two years before Dad exhibited signs of the disease. She had been bedridden, fallen away to 80 pounds, unable to walk or speak, at death’s door for over a year. Mom and I went to see her on her birthday. We took her some balloons.

“Yes,” I concurred without hesitation.

Cine was in much worse shape than Dad had been, but the day Dad died, one of the nurses on Dad’s floor at his nursing home had said to me, ‘Your father was such a sweet, wonderful man. We enjoyed him so much.” How had she known that? How can you know that about someone who can’t communicate . . . unless Dad’s spirit had been able to break out of his silence and communicate somehow, quite apart from words?

So my mother and I bent down on either side of Dad’s sister, took her hands, and I softly said, “Aunt Cine, we want you to know your brother has gone on ahead of you. He’s waiting for you with Jesus. If you’re ready to go, we give you our permission and blessing to go home.”

“Uuuhhh . . . . uuuhhhh.” Her face turned up to mine, her wild yet shallow eyes looking directly into mine, and I knew she was there. She saw me. We kissed her and went home. So did Cine, the very next day.

I never gave much credence to the notion that sometimes people need permission from their loved ones to leave. I always thought your body had the deciding voice in when you die. Now I’m certain that is not always the case.

Two intelligent, resourceful, achieving, loving people, struck down by a disease so heinous and hideous that it strikes terror in the hearts of most people. Any way but that one! What could possible be the sliver lining in my father’s and my aunt’s deaths? Simply and profoundly this: no matter what disease does to our bodies or our brains, God’s Spirit never leaves our spirit. We remain, whole, intact, filled with all the life and love we’ve known and given away, whether the outside world can access it or not. And is that a meager comfort in the face of such deep loss and pain? No, even though my sister, brother and I know we live in the shadow of DNA that may spell the same end for us, especially now that our mother has vascular dementia from numerous small strokes. It is somehow a great comfort and source of hope.

Yes, I pray researchers will home in quickly on what causes and what can cure and prevent Alzheimer’s, BUT while I wait, I rest in the knowledge that who I truly am, who we truly are, endures above and beyond all else. Count that as an incredible, joyful, overcoming blessing!

2 thoughts on “Lost and Found”