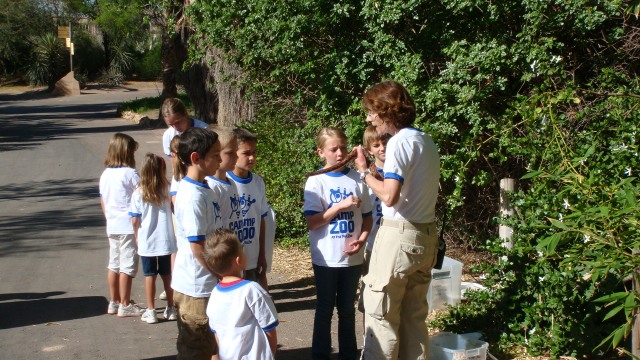 I had no idea in 2012 that I’d be on the TV news in more difficult days than when this photo was taken. Dusting off one from my blogspot posting days, and yes, the serpent is still trying to get me to bite on offense, but I won’t take his bait or, prayerfully, let him envenomate me with accusations and lies, both of which I’ve had to “shake off” with truth in the last month. My words come back as reminders to me, and I pray they minister to you. Um ….  when we gave our lives to Jesus, this battlefield IS what we ( most of us naively, unknowingly) signed up for.

Seventy-five unsupervised and rambunctiously excited kindergarteners sat in a circle on the concrete floor in the echoing auditorium, hands reaching out to touch the St. Helena Mountain king snake I held about five inches behind its head as I walked around their group. This lithe little snake had enough and told me so – snap – in the flesh between my thumb and index finger.

Great – now I had an angry snake latched painfully firmly to my hand and wide-eyed children still waving “I want to grab you” hands. All I could think to do was try to shake off the stressed snake, hide my bleeding hand, and put the irritated reptile away. It worked, until five feet later when the still-agitated snake still told me I wasn’t retreating to it’s transport quickly enough and nailed my hand again.

“This isn’t the job I signed up for,” I thought as I came back into the room with a cuddly by comparison hedgehog in my gloved hands. But it was exactly what I signed up for, though I never realized when I took the job at he Zoo that being bitten was an occupational hazard inherent in inspiring Zoo guests to amazement at the adaptations in wildlife. My praise to Jesus, I came to no harm from that serpent’s two bites, and the next day the marks were as good as gone.  No other snake in the programs collection ever bit or attempted to bite me.

I never dreamed being bitten by the enemy was in the job description when I gave my life to Jesus, either. No pastor or priest ever gives the benediction, “May the Lord bless you and keep you. Beloved of God, go in peace, and now you have a target on your back,” but it’s true. The day I gave myself wholly and forever to God through Jesus, I crossed a line and took a side that makes the Devil more than slightly agitated.  The Bible describes him as a thief, serpent or snake:

The great dragon was hurled down – that ancient serpent called the devil, or Satan, who leads the whole world astray.  Revelation 12:9

“The thief comes only to steal and kill and destroy; I (Jesus speaking) have come that they (we) may have life, and have it to the full.”  John 10:10

How does the snake latch on to us? The devil’s venom is lies and offense: he lies about our identity, accuses us and bring up condemnation as though the Blood of Jesus isn’t more than enough to truly wash away and cleanse us from all sin, injects us with offense when someone wrongs us, and plants fear that God isn’t faithful to His promises, as though His Word isn’t powerful and God is a liar with less than overwhelmingly loving and good plans for each of our lives.

When Peter in his first letter to the church exhorted believers to humble themselves before God, cast their anxiety on God, and be self-controlled and alert, he likened the devil to a prowling lion looking for someone to devour, and he was doing it then and still doing it now to believers. Peter doesn’t end on that note of warning, but concludes by saying, “And the God of all grace, who called you to his eternal glory in Christ, after you have suffered a little while, will himself restore you and make you strong, firm, and steadfast.”  (1 Peter 5:5-10)

I remembered the snake incident at the Zoo today in a rush of recognition that, of course, the devil isn’t happy that I’ve forgiven a betrayer and have continued to forgive and pray for his salvation. I must have a huge red bulls-eye that reads, “bite this one” on my back. Well, of course we’re targets, and the more damage we do or will inflict on the devil’s plans through our forgiveness, unrelenting love, faithfulness, and praise to God, the more irritated and madder that “adder” will get. But then which do I want: to fall into bitterness to placate the devil and anger my Father and Savior, the Living God, or would I rather anger the devil and please, obey and honor God?

The apostle Paul encountered the devil in the exact form of a poisonous snake on the island of Malta when the ship carrying him to Rome ran aground in a severe storm.  Paul’s companion and physician Luke recounts the incident:

The islanders showed us unusual kindness. They built a fire and welcomed us all because it was raining and cold. Paul gathered a pile of brushwood and, as he put it on the fire, a viper, driven out by the heat, fastened itself on his hand. When the islanders saw the snake hanging from his hand, they said to each other, “This man must be a murderer; for though he escaped from the sea, Justice has not allowed him to live.” But Paul shook the snake off into the fire and suffered no ill effects. The people expected him to swell up or suddenly fall dead, but after waiting a long time and seeing nothing unusual happen to him, they changed their minds and said he was a god.  Acts 28: 1-7

And thanks to Jesus, the Devil may bite, but he can’t inflict any permanent damage on us, either, when we choose to believe God’s Word and love are true and faithful:

For he will command his angels concerning you to guard you in all your ways. .. You will tread upon the lion and the cobra; you will trample on the great lion and the serpent. “BUT I’ll “shake off the snake” of accusations and fear from the lying devourer and just tell the serpent taking aim at me to “TALK TO THE HAND!” By that I don’t mean mine, but “THE HAND OF JESUS, THE HAND THAT BEARS THE SCARS OF THE NAILS” that drew the Blood that paid for my complete forgiveness and forever righteousness in Yeshua the Messiah, the conquering King of Kings.

The seventy-two (disciples of Jesus, whom he had sent out to do his work) returned with joy and said, “Lord, even the demons submit to us in your name.”  He (Jesus) replied,” I saw Satan fall like lightning from heaven. I have given you authority to trample on snakes and scorpions and to overcome all the power of the enemy; nothing will harm you. However, do not rejoice that the spirits submit to you, but rejoice that your names are written in heaven.” Luke 10:17-20