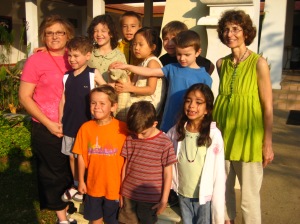 The laws of our land provide protection for people whose testimony against the “bad guys” could potentially bring repercussions and physical violence from the “bad guys” down on them. It occurred to me yesterday, though, while I was having the fun of praying for and with four complete strangers I met in four different places, that God doesn’t expect His children who’ve experienced His blessings to remain silent about His goodness in our lives. Quite the opposite: He calls us to testify to His goodness, to his power, to His love, to the miracles large and small that God does for us every day, even for the miracle of the breath in our lungs and blood in our bodies.

Decades ago a phrase hit the lips and bumper stickers of Christians: If you were put on trial for being a Christian, would there be enough evidence to convict you?

Like most Christians, for many years I was content to be a “city on a hill” and “Let your (my) light shine before men in such a way that they see your (my) good works and glorify your Father who is in Heaven.”Matthew 5:16 NIV

“I’d rather BE a witness than speak a witness” and “Preach the Gospel, and if necessary, use words” were my guiding phrases.

The trouble is, how many people who don’t know me will know that glorifying my Father in Heaven is my motivation for the clean life I try to live and the generosity and kindness I try to show? If I’ve never told anyone I’m a Christ follower, how will anyone know I’m anything more than a person who does good things? Frankly and honestly, I think most of us would admit that we’re scared spitless to say we’re Christian, especially in this political and cultural climate we live in. What, admit I’m a Christian and open myself to labels of “Intolerant,” “Narrow-Minded,” “Bigoted,” and “Self-Righteous”? I’m the first to admit that lots of people calling themselves followers of Jesus have done lots of selfish, arrogant, thoughtless, and hurtful things to other people. They have dished out condemnation with not a speck of humility, compassion, understanding, respect, or loving hand of forgiveness, redemption, regeneration, hope and renewal that Christians should be all about, given the Redeemer, Savior, healer and Lover of our Souls we say we serve.

But those people don’t let me off the hook. Yes, every person will have to give account for every idle word we’ve spoken and every evil deed we’ve done. Christians just know whose name and blood we’ll plead as our atonement. But those of us who call upon the name of Jesus ought to be calling out his love, his kindness, his power to heal and deliver, testifying to the good things He’s done for us and in us so that other people can glimpse this Savior who, in Himself, will draw them to His great love.

If we don’t tell them who will? How many places do you think Billy Graham can be in one day?

But in your hearts revere Christ as Lord. Always be prepared to give an answer to everyone who asks you to give the reason for the hope that you have. But do this with gentleness and respect, keeping a clear conscience, so that those who speak maliciously against your good behavior in Christ may be ashamed of their slander. For it is better, if it is God’s will, to suffer for doing good than for doing evil. 1 Peter 3: 15-17 NIV

They triumphed over him by the blood of the Lamb and by the word of their testimony; they did not love their lives so much as to shrink from death. Revelation 12:11 NIV

I, even I, am the Lord, and apart from me there is no savior. I have revealed and saved and proclaimed—I, and not some foreign god among you. You are my witnesses,” declares the Lord, “that I am God. Isaiah 43:11-12 NIV

I will give you thanks in the great assembly; among the throngs I will praise you. Psalm 35: 18

Let the redeemed of the Lord tell their story—those he redeemed from the hand of the foe, those he gathered from the lands, from east and west, from north and south. Psalm 107:2

Jesus himself told us to speak about him:

Then the eleven disciples went to Galilee, to the mountain where Jesus had told them to go. When they saw him, they worshiped him; but some doubted. Then Jesus came to them and said, “All authority in heaven and on earth has been given to me. Therefore go and make disciples of all nations, baptizing them in the name of the Father and of the Son and of the Holy Spirit, and teaching them to obey everything I have commanded you. And surely I am with you always, to the very end of the age.” Matthew 28: 16-20 NIV

But you will receive power when the Holy Spirit comes on you; and you will be my witnesses in Jerusalem, and in all Judea and Samaria, and to the ends of the earth.” Acts 1:8

I’m pretty sure you can’t testify, give an answer, teach, praise, give thanks, or be a witness without your words coming into the picture somewhere!

Yesterday I was blessed four times, because yesterday I opened my mouth four times. Let me be the first to say, though, that if my life, my actions, how I treat other people denied what I say about Jesus, my words would very likely be used against me on the day I stand before God in Heaven – they would be some of those “useless words.” But I’ve risked taking a risk before and seen –witnessed – God show up and do some incredibly good things. So yesterday I took a risk four times and asked four people if I could pray for them.

Wow! Glenn is a Believer and teared up when I prayed God would show him the purpose for which he was created, because that was exactly what was on his heart. Ronnie was holding up a cardboard sign, but he showed me his tattered Bible when my friend and I asked if he had one, and we gave him the physical help we could for his needs AS WELL AS words in prayer. Doug waited on our table, and he knows there is a God but doesn’t know much beyond that, except that he needs direction in his life. Bryan took my money at the gas station, and he’s dealing with PTSD after coming back from deployment to Afghanistan. He doesn’t go to church, doesn’t know of a good one in the area, but he wants to get his little twin daughters into a church somewhere.

If we don’t open our mouths and speak up something, somehow, for all the goodness God has poured into our lives, who on Earth will know He still does those things? Who will have a reason to seek, ask, knock if we keep quiet about the One who answers?

Oh yes, I have heard people who reply, ”No, thanks,” when I ask if I can pray for them, but even that opens a window to ask if they’ve been turned off by someone acting obnoxious while proclaiming the name of Jesus. And sometimes I just say, “Okay, well, Jesus loves you, so be blessed today” as I walk away smiling.

How hard can that be? Yes, I need to ask the Holy Spirit to put a guard over my mouth and choose my words for me carefully, thoughtfully, kindly, wisely,  to tell me when I’ve said enough and keep me from saying too much.That’s a danger for a storyteller and enthusiastic teacher at heart like me. BUT when we live in a nation where, so far, the worst we’ll get for witnessing to the goodness of Jesus is a smart, curt answer or yes, maybe we’ll be called an intolerant bigot while our brothers and sisters are literally dying for their refusal to deny Jesus, how come we’re so quiet? Do we think it’s better to be “Silent Witnesses”? If we don’t speak up, who will? How will any ever know the relentless love of our Father in Heaven is we don’t say that He is, who He is, and at the very least what He’s done for us?

Jesus also said these sobering words to his followers then, and they still stand for us today:

He died for us. He loves us. He helps us. What can we do to say thanks? I rest my case.